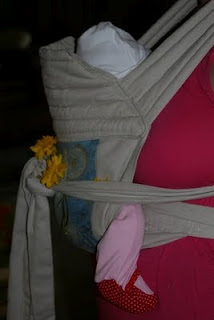 Wearing A in my first Babyhawk that I used with C.  C had picked me some flowers that I placed in the straps! :)


There are many different brands of mei tai’s, even WAHM make them and sell them.  They are a carrier that’s an Asian Style Carrier.  These were used for centuries and I have to tell you this is the carrier I would grab if I could only grab ONE carrier from my burning home.  I personally feel these are the most versatile and if you don’t want to buy many carriers this is a great choice! This carrier consists of a square body shape with a set of waist straps and longer shoulder straps.   Some people complain about the long straps, but I’ve never had an issue dealing with them.  I was able to always keep them up off the ground.  Many times this is the carrier I’d throw on when taking my baby out of the car and into a store or anywhere.

It’s not hard at all to figure out.  There is not as many steps to putting it on as like a wrap.  It’s very functional because many different sized people can wear it.  It’s just tied with longer or shorter tails, depending on your size.   There is no thought process on adjusting for different sizes.  It’s just how you’ll tie it on.  Some people like the ease of a buckle but for me tying was just as convenient and I found that the buckles on some carriers like Ergo's were a pain for me.

It’s so comfy!  I have found that I like this even more than the SSC, it just fit to my body better.  It felt like it was built for me and the Ergo always felt like more of a contraption.   I love my Babyhawk and loved it so much that when trading my woven wrap I ended up with another Babyhawk mei tai.  I love this brand because of the beautiful fabric choices, customizing choices, and the padded straps.  They aren’t padded too much like I find the Ergo to be, but just enough so it’s not digging in.   This is my only complaint about a lot of the WAHM ones I’ve seen, the fact that they don’t have that padded area on the straps.  I find that once the baby is heavier that padding is nice for your shoulders.   I like the fact that I can froggy leg the newborns and wear them that way and then as they get older put their legs out the sides.  I have always found my kids loved being worn in the mei tai.  I've worn them as newborns on up to toddlers in my mei tai.  If you are looking to only purchase one carrier, I don't believe you can go wrong with a mei tai!

Where to Buy? My Affiliates!

Click on the buttons below to enter their stores! If you make a purchase by entering the store through this link, you can earn me a commission!!!